It’s been nearly 18 months since Sajid Javid, the Tory Government’s Housing Minister published the White Paper “Fixing the Broken UK Housing Market”, meanwhile Rugby property values continue to rise at 9.8% (year on year for the council area) and the number of new homes being constructed locally bumps along at a snail’s pace, creating a potential perfect storm for those looking to buy and sell.

The White Paper is important for the UK and Rugby people, as it will ensure we have long-term stability and longevity in property market as whole. Rugby home-owners and Rugby landlords need to be aware of these issues in the report to ensure they don’t lose out and ensure the local housing market is fit for purpose. The White Paper wanted more homes to be built in the next couple of decades, so it might seem counter-intuitive for existing home-owners and landlords to encourage more homes to be built and a change in the direction of housing provision – as this would appear to have a negative effect on their own property.

Yet the country needs a diversified and fluid property market to allow the economy as whole to grow and flourish … which in turn will be a greater influence on whether prices go up or down in the long term. I am sure every homeowner or landlord in Rugby doesn’t want another housing crisis like we had in 1974, 1988 and most recently in 2008.

Now, as Sajid Javid has moved on to the Home Secretary role, the 17th Housing Minister in 20 years (poisoned chalice or journeyman’s cabinet post) James Brokenshire has been given the task of making this White Paper come alive. The White Paper had a well-defined notion of what the issues were.

The first of the four points brought up was to give local authorities powers to speed up house building and ensure developers complete new homes on time. Secondly, statutory methods demanding local authorities and builders build at higher densities (i.e. more houses per hectare) where appropriate. The other two points were incentives for smaller builders to take a larger share of the new homes market and help for people renting.

However, lets go back to the two initial points of planning and density.

For planning to work, we need a robust Planning Dept. Looking at data from the Local Government’s Association, in Rugby, the council is below the regional average, only spending £24.72 per person for the Planning Authority, compared the regional average of £30.13 per head – which will mean the planning department will be hard pressed to meet those targets. 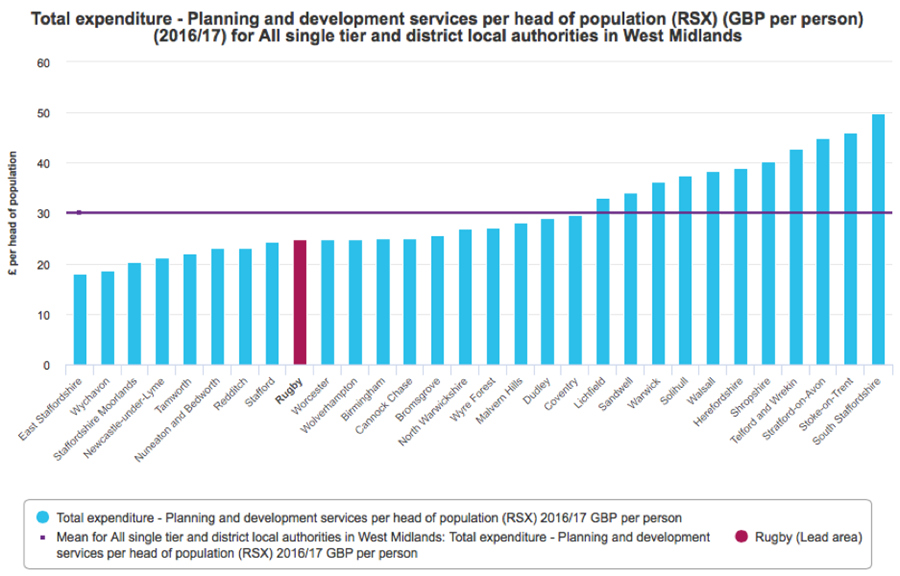 However, 92% of planning applications are decided within the statutory 8-week initial period, above the regional average of 83% (see the graph below).  I am slightly disappointed and also pleased with the numbers for our local authority when it comes to the planning and the budget allowed by our Politician to this vital service. 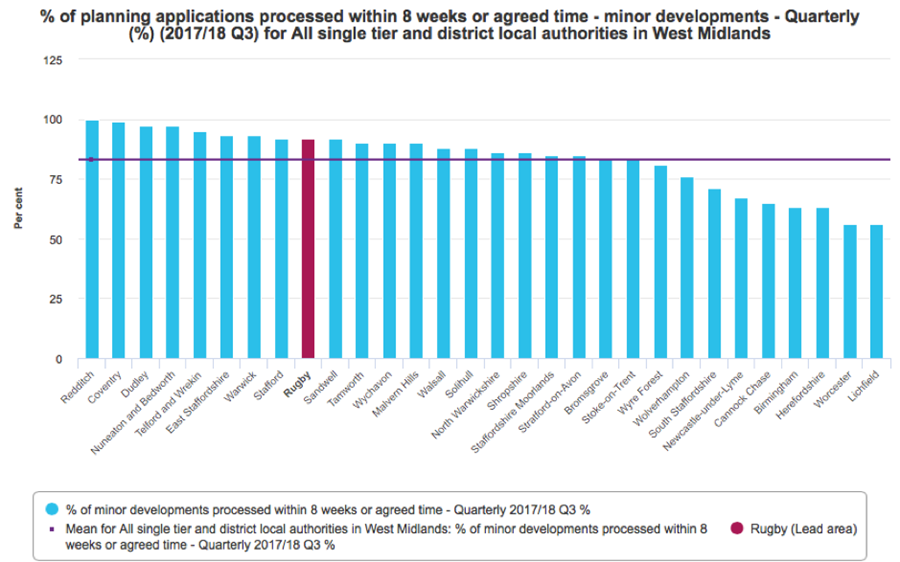 I would agree with the Governments’ ambition to make more efficient use of land and avoid building homes at low densities where there is a shortage of land for meeting identified housing needs, ensuring that the density and form of development reflect the character, accessibility and infrastructure.

It’s all very good building lots of houses – but we need the infrastructure to go with it.

Talking to a lot of Rugby people, their biggest fear of all this building is a lack of infrastructure for those extra houses (the extra roads, doctors surgeries, schools etc.). I know most Rugby homeowners and landlords want more houses to be built to house their family and friends … but irrespective of the density … it’s the infrastructure that goes with the housing that is just as important … and this is where I think the White Paper failed to go as far as I feel it should have done.

Interesting times ahead I believe!